I share in comments below on Running - Techniques, Shoes, Clothes and People.

Scientists say they can explain Usain Bolt's extraordinary speed with a mathematical model.

His 100m time of 9.58 seconds during the 2009 World Championships in Berlin is the current world record.

They say their model explains the power and energy he had to expend to overcome drag caused by air resistance, made stronger by his frame of 6ft 5in.

The team calculated that Bolt's maximum power occurred when he was less than one second into the race and was only at half his maximum speed. This demonstrates the near immediate effect of drag, which is where air resistance slows moving objects.

They also discovered less than 8% of the energy his muscles produced was used for motion, with the rest absorbed by drag. 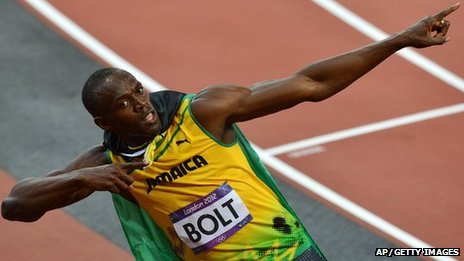 How To Start Running For Beginners

It's no secret why running is fun. Speed, the wind in your face, that adrenaline rush -- as soon as toddlers learn to run, it's hard to keep them still. They will choose running over walking as the preferred mode of transport. It's too bad that as people get older, as we become more circumspect in our movements, we also cease to run. In some cultures running is even considered a big no-no for grownups to do.

There's no great secret to running, and the benefits are great. Would you like to recapture the joy of running? Here are some ideas on how to start running for beginners.

Ready to run? Paige Jones, fitness instructor with the Piedmont Hospital Health and Fitness Club, has some pre-run stretching tips to help you prevent injury.

In this short video, Coach Nicole of SparkPeople.com leads you through ten of the best stretches that runners and joggers can do, targeting all the muscles, joints and problem areas associated with running (psoas, hip flexors, quads, hamstrings, thighs, calves, shins, shoulders, IT (iliotibial band) and more. A great flexibility routine to be performed at the end of your run!

BYU exercise science professor Sarah Ridge and her colleagues fount that experienced runners who transitioned too quickly into minimalist five-finger running shoes suffered an increased risk of injury to bones in the foot. They recommend those who wish to try out the shoes transition slowly to avoid injury.

UK Sports podiatrist Ian Sadler talks to the Sports Injury Clinic about what should be considered before buying a new running shoe or trainer.

Going out for a training run, the last thing you are doing is thinking about the temperature of your stomach skin. Next time you are in the middle of your run, touch your stomach. Most likely, it will feel cold and maybe even clammy. Changes in your cardiovascular system cause your stomach to remain cold while other parts of your body warm up during a run.