Any disease can be successfully treated or managed if its root cause is known and targeted effectively.

Ayurveda, one of the major traditional forms of medical practice in India, has produced many useful leads in developing medications for chronic diseases.

Ayurveda is an intricate system of healing that originated in India thousands of years ago. Historical evidence of Ayurveda can be found in the ancient books of wisdom known as the Vedas that were written over 6000 years ago. Ayurveda provides novel approaches to cancer prevention that are considered safe.

Classical Ayurvedic texts have several references to cancer. Some terms used to describe the condition are general while others are much more specific.

Charaka and Sushruta Samhita (700 BC) both described the equivalent of cancer as granthi (benign or minor neoplasm) and arbuda (malignant or major neoplasm). Both can be inflammatory or non-inflammatory, based on the doshas (Vata, Pitta and Kapha) involved. The term dosha describes the three principles that govern the psychophysiological response and pathological changes in the body. Ayurveda described health as the balanced coordination of these three systems in body, mind and consciousness. The fundamental theory of Ayurvedic treatment is based on restoration of the balance between these three major bodily systems.

Arbuda is the most specific term for a cancerous malignancy. Gulma is one another reference used to describe any palpable hard mass in the abdomen. It is any hard, tumor like mass in the abdominal region, which could be benign or malignant.

Ayurvedic classification of neoplasms depends upon various clinical symptoms in relation to tridoshas.

Group I: Diseases that can be named as clear malignancies, including arbuda and granthi, such as mamsarbuda (sarcomas) and raktarbuda (leukaemia), mukharbuda (oral cancer), and asadhya vrana (incurable or malignant ulcers).

Group II: Diseases that can be considered as cancer or probable malignancies, such as ulcers and growths. Examples of these are mamsaja oshtharoga (growth of lips), asadhya galganda (incurable thyroid tumour), tridosaja gulmas, asadhya udara roga, (abdominal tumours like carcinomas of the stomach and liver or lymphomas).

At CHARAKA, we are providing effective treatment for cancer, focusing on the principle of detoxification, rejuvenation. Our treatment involves:

Daiva vyapashraya chikitsa (divine therapy), Yoga & Pranayama are also suggested as per the need and condition of the patient.

Our cancer therapies are based on the philosophy of Removal the cancerous cells when possible and destroy any cells that remain.

Our Ayurvedic treatments can be safely combined with chemotherapy and radiotherapy procedures to minimize the side effects. Even in surgical treatment, this treatment can be started immediately to prevent metastasis and further healing.

#How can Ayurveda treatment help to combat Cancer?

It is now established that "reverse" signalling from dysfunctional or abnormal Mitochondria play important role in the initiation and progress of Cancer cells and conversely it is also proven that Healthy Mitochondria can suppress the growth of cancer cells and make them more susceptible to the treatment. So any drug or treatment which can improve Mitochondrial function can modify the course of the disease and arrest its growth. In this article, we have seen that Mitochondria and Agni are the same organelles and in Ayurveda, for cancer following treatment is provided

1) To remove the free radicals, toxins, excess amount of dirty Pitta, Kafa and Vata which are known to impair the functions of Agni

2) To restore and strengthen the metabolic functioning of Agni due to which further chain of events are curtailed and disease process comes under control.

3) To change the cellular environment, which breaks down or absorb the Lactic acid which is produced by cancerous cells. By this, Cancer cells lose their ability to spread and metastasize

4) To improve the Immunity which then destroys Cancerous cells.

5) There are certain herbs, like Neem which stimulates tumour suppressor pathways and compel the body to produce more tumour's death promoting ( Apoptosis) chemicals and reduce anti-apoptotic chemicals; all of these modalities lead to the death of cancerous cells and are removed from the system.

10) Some household herb like Fenugreek absorbs lactic acid and stops glucose supply to cancer cells hence they are deprived of their food and die.

What diet is recommended to a patient suffering from Cancer?

The best diet is to follow intermittent fasting or calorie restricted diet which is sufficient enough to provide all required nutrients to the body and immunity but at the same time, deprives cancer cells of their food and compel them to die. General guidelines are as follows

2) No Sabudana, No vinegar, no Tobacco, No Liquor.

5) No raw food or salad, especially when on chemotherapy

6) Minimum intake of Sugar with one or two days of " NO sugar" per week in any form (Which means no White/ brown sugar, No Jaggery, No honey, No fruit juices, no Carrot or beetroot juice)

7) Once a week fasting as per the advice of expert Vaidya.

1) Are there any steroids in the Herbal medicines - No, we do not do such kind of unscrupulous or non-ethical practice. My drugs can be tested and subjected to any kind of test for that matter.

2) Are these drugs safe during Chemotherapy- There are certain reports, published in good journals, which has proven the good effect of chemotherapy when combined with herbal treatment. ( Care to be taken that herbal treatment should be of standardized quality and should not be given on the day of injectable chemotherapy, rest it can be given. It also depends on stage and type of cancer, so final decision to be taken only after discussing every pros and cons). There are various clinical studies indicating that if standardized herbal preparations of Curcumin, Ashwagandha are given along with chemotherapy, results are better. Many chemoresistant cancers respond very well when supplemented with Curcumin, Ashwagandha and Tinospora cordifolia.

3) Can herbal therapy replace or avoid chemotherapy- No, one should follow complete modern protocol as it is. Herbal treatment is mainly given to as chemo adjuvant to improve the immunity and mitochondrial function as stated above.

4) Can Ayurveda treatment avoid surgery and radiation- All of you will be surprised to read the fact that, in Ayurveda, which was written 3000 years B.C., it is clearly mentioned that first line of treatment of Cancer is to surgically remove it and then to " Burn" the margins, this concept is similar to today's modern protocol of Surgery followed by Radiation. So any tumour, if operable, should be removed promptly by an expert Onco-Surgeon.

5) What is Chemoprevention? This term was coined by Dr Michel Sporm, in 1976. Chemopreventive are drugs, natural or Synthetic, which have potential to Reverse, Suppress and or Prevent the further growth of cancer. I advise various such Chemopreventive herbs and ways to many normal people and also to cancer patients. 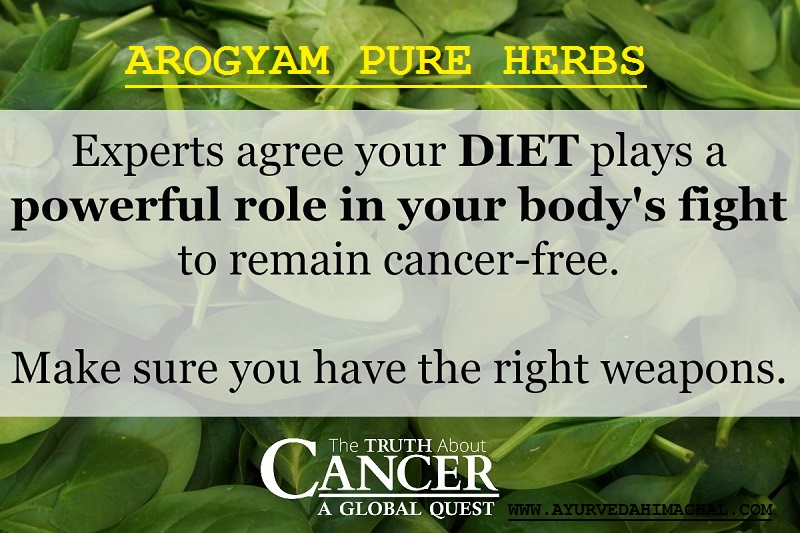