See below many selected videos and online resources for CrossFit Exercises

Fitness and Bodybuilding Workouts for Health and Fitness in India!

Read about Aspects of Fitness

Thousands of athletes worldwide have followed our workouts posted daily on this site and distinguished themselves in combat, the streets, the ring, stadiums, gyms and homes.

Do Not Let This Happen Again

Someone in India asked me how to become a CrossFit trainer?

My response: How to Start CrossFit www.crossfit.com/cf-info/start-how.html

Initially, you can also start on your own depending on your level.

You can find Training Courses on www.crossfit.com/cf-info/certs.shtml

You can also try to find CrossFit trainers and classes in India or internationally.

Explanation of Handstand Push-ups, Scales, Kipps, Strict - CrossFit - Health and Fitness India Scroll down and you'll find several pages of embedded videos. This is one of the latest ones which I've also shared here

On 27 June 2013: Amazing! I've been going to a physiotherapist since few days. Today morning before going to him, I watched the Greg Glassman, Founder & CEO, Crossfit: March 13, 2013, Full Talk video (see below).

After that I created the Crossfit - Health and Fitness India page.

After that I went to the clinic. There I met a news reporter who's the deputy bureau chief of a top news channel. Highly unfortunately, he has suffered multiple fractures because he fell forward and that he put his hands straight which caused the multiple fractures. I could hear him scream in pain as the physiotherapist was working on him.

When the physiotherapist got done, I mentioned to him that we should teach functional training to the masses like how to fall, how to pick up things and etc. on which the physiotherapist said yes. I think that if the masses are unhealthy and unfit then it's negative for them and for our society, environment and world overall.

Crossfit is about functional training and fitness and that it's amazing that I had thought of it and that had viewed the founder's hour long video and that had also created the Crossfit - Health and Fitness India Facebook page just before going to the clinic and meeting the news reporter.

I shared with the news reporter the Health and Fitness India network's website and I wish that he would help me to bring the site increasingly to the people in India and also worldwide. I asked him if he has a child on which he showed me the photo of his little daughter on his mobile. I suggested him to provide her functional training from early on. I wish that my efforts would be of increasing value to our world and that I would also work with more and more of the best people from worldwide.

Combining the CrossFit training methodology with a diet of meat and vegetables, nuts and seeds, some fruit, little starch and no sugar brings "a jet stream of adaptation," says CrossFit founder Greg Glassman.

In the pyramid Glassman created, nutrition is the foundation, with met-cons, gymnastics, weightlifting and throwing, and sport following.

"Each level builds on the level below it," explains Nicole Carroll, director of certification. "If your nutrition sucks, these things will not be where they could be if it were more solid."

Likewise, Glassman says CrossFit favors Barry Sears' Zone Diet "because it does give me accurate and precise prescription for caloric intake and, more importantly, the exact levels of macronutrient that I can start at."

Likewise, trainers and coaches can make informed decisions on how to tweak an athlete's diet for improved performance, he says.

"It's not quality or quantity. It can and it should be both."

The Test of Fitness

"How many women have beaten that winning time from 2007...That's our next generation..." Wonderful!

The Women of CrossFit Dynamix

Reebok CrossFit ONE - Why do you Crossfit?

CrossFit - The Fittest Woman in the World: Thor's Daughter

CrossFit - Let Me Tell You About CrossFit

CrossFit can change how a woman both defines beauty and feels about her body, as Rita Benavidez, Jackie Perez, Erin Cianciolo and Andrea Ager discuss in this video.

Once thinking beauty was a picture of a waify woman on a magazine, Benavidez feels differently now. "My perception of beauty has changed over the past few years," Benavidez says. "True beauty ... is strength and fitness, and confidence in yourself."

Perez was originally motivated by trying to be skinny. "That wasn't getting me anywhere," she says. "With CrossFit, I set goals. I want to deadlift 225, I'm going to hit that faster than I'm going to look in the mirror and like what I see."

Ager says putting in the work is key to getting what you want. "I think that hard work and the way that your body looks go so hand-in-hand," she says. "Once you do get a body that you want, you're very proud of it ... you're proud of what your body can do."

Through CrossFit, these women are confident, stronger and fitter. They are mothers, tomboys, coaches. They are CrossFit athletes.

What is CrossFit? CrossFit is an effective way to get fit. Anyone can do it. It is a fitness program that combines a wide variety of functional movements into a timed or scored workout. We do pull-ups, squats, push-ups, weightlifting, gymnastics, running, rowing, and a host of other movements. Always varied, always changing, always producing results. Kids, cops, firefighters, soccer moms, Navy SEALS, and grandmas all do CrossFit. In fact, hundreds of thousands worldwide have followed our workouts and distinguished themselves in combat, the streets, the ring, stadiums, gyms and homes.

What Is CrossFit? Short by CrossFit by Overload

CrossFit - Number 1 and Number 2: A Day of Training

Find out how 2010 Games champion Graham Holmberg and second-place finisher Rich Froning Jr. are training for the 2011 Reebok CrossFit Games. At the Rogue Fitness training center in Columbus, Ohio, and CrossFit Cookeville at Tennessee Tech University, Sevan Matossian captures these two elite athletes preparing themselves for the mental and physical battles they are soon to encounter.

To prepare for this year's Games, Froning says his game plan is simple: "Train as hard as I can. That's what I'm going to do, and that's what I have been doing."

Reigning champion Holmberg confronts criticism about his performance and obscurity over the past year. He says the Open was a "lose-lose situation" for him—if he did well, people expected it, but if he did poorly, people would question his capability. Holmberg finished 37th overall in the Open, and he didn't compete in a regional event.

Both athletes say they are ready for the Home Depot Center and July 29. They analyze their own past performances and that of their peers, sizing up the competition.

"We'll see what happens when we get to the Games," Holmberg says. "That's all that really matters."

Along with Crossfit, also see videos for abs, back, biceps, chest, shoulders, and legs. 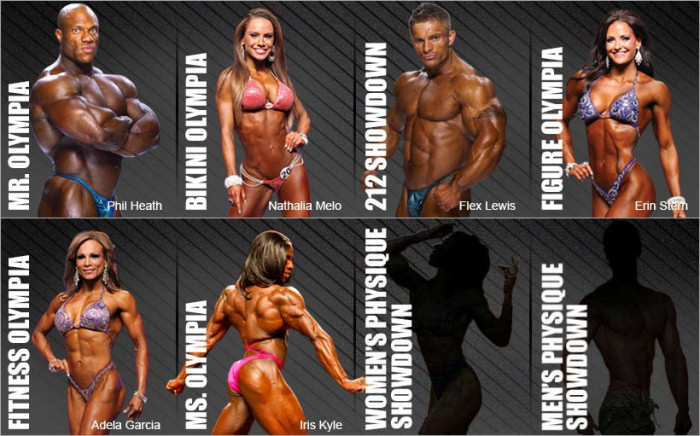 So says Lucas Parker, two-time CrossFit Games competitor from the Canada West Region. Parker is perhaps best known for his beard and body hair, as well as propensity for getting naked or rocking a tuque and Speedo swimsuit.

"I think it's important to try to find structure and purpose in everything you do—for training for the CrossFit Games to making breakfast," he says while cooking bacon in his bathrobe.

Parker believes in putting "your whole life into a state of training." Perhaps that's why his warm-up takes 45 minutes.

"It's quite a long process, but I find that for me personally to make sure that my technique is on track and all my muscles are firing properly and to avoid injury, I like to take a nice, long warm-up," he explains.

"Or maybe that's why I'm sore and tired all the time because I spent an extra seven or eight hours a week just warmin' up, but (that's) the way she goes."

This year's goal: win the Canada West Regional. In the long term: win the Games.

"I wouldn't be putting so much time and energy into this if I didn't think I could be the best in the world," he says.

Rich Froning and Dan Bailey snatch and clean and jerk during a throwdown at the CrossFit Tour Big Sky Event in Montana. Froning's 290 kg total would qualify him for the 2013 USAW National Championships in the 94 kg weight class had these lifts been at a sanctioned event.

On November 11, 2010 Brett Marshall and Chelsea Miller of CrossFit Calgary respectively took on REALLY epic challenges - a 20k row and 500 burpees - to help raise money for the Leadership as Rx'd Project India... this is the story.